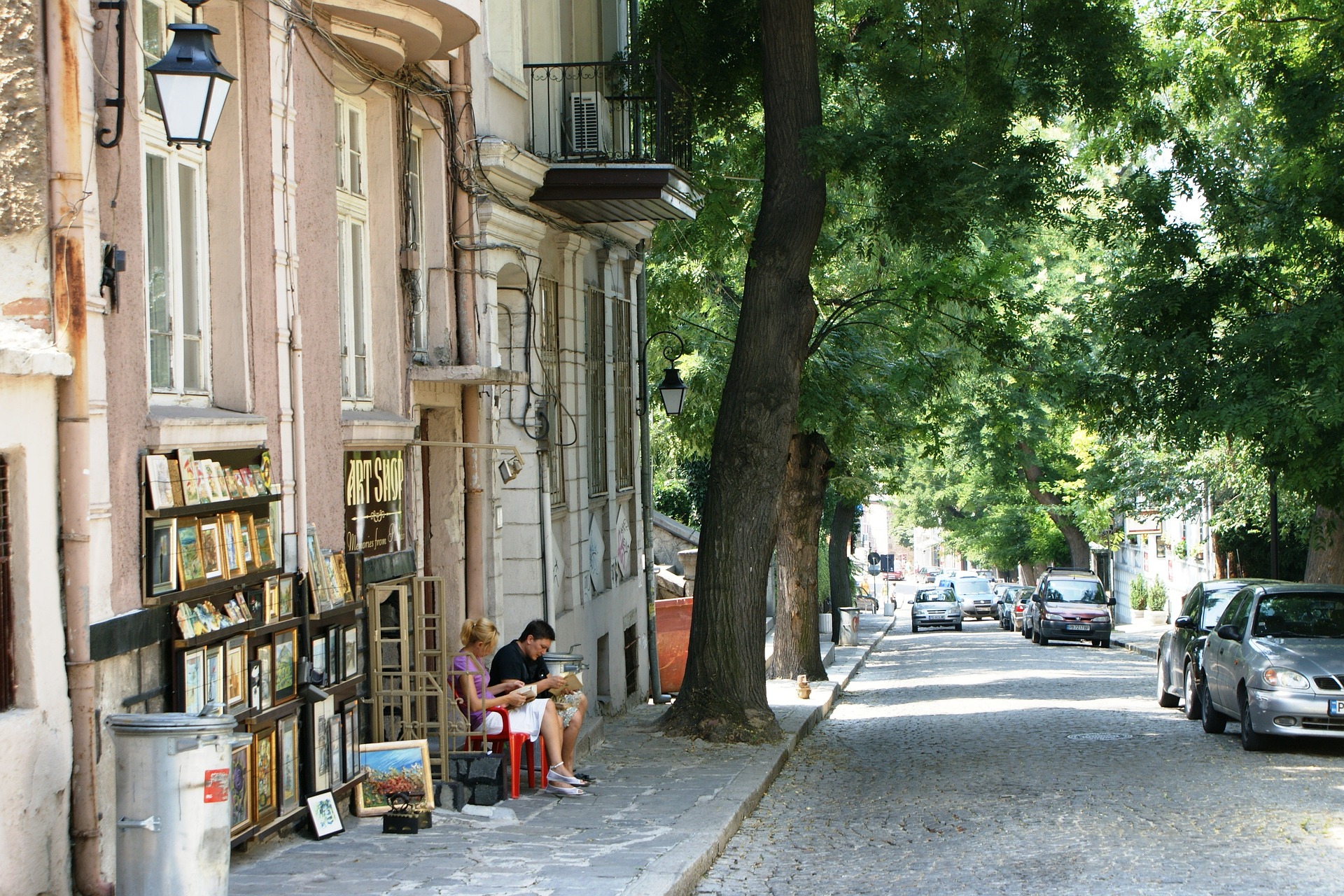 This is the largest beach resort in Bulgaria with the longest and widest beaches, hotels
are spread along the beach and among the dunes. Sunny Beach lies 35 km away north of the city of Bourgas, it enjoys 1,700 hours of sunshine from May to October, plenty of ozone and ultraviolet rays, along with the fresh breeze.

For the sports enthusiasts there are surfing, water skiing and parachutes, hang-gliding,
sailing, yachts, and many other activities.

A town and seaside resort, situated terrace-like on a small bay on the Black Sea, 31 km north of Varna, 37 km south-east of Dobrich and 500 km tast from Sofia. It’s third in significance Bulgarian port after Varna and Bourgas, used for medium-size passenger and trade vessels. Population is 13,500. It springs to life towards the end of the 6th century B.C. as the ancient Greek colony Crunoi (later Dionysopolis) in place of a Chalcolithic (4th-3rd millennium B.C.) and a Thracian (1st millennium B.C.) settlement.

Bourgas is the fourth largest city in Bulgaria, situated in the south-eastern part of the country. The climate here is temperately continental with a distinct impact from the Black Sea.

The Port of Bourgas is the biggest sea port in the country. A Duty Free Zone was established in 1989 with the objective to create attractive conditions for foreign investors. The favourable geographical location and advanced transport infrastructure of Bourgas are good prerequisites for development of tourism and trade. Bourgas is not only an important industrial centre in the country, it also has considerable resources for tourism.

What attracts people here mostly is undoubtedly the sea. The city is a starting point for visiting the seaside resorts in the area, The Slantchev Bryag resort and The Elenite holiday village to the north and The Duni holiday village, renowned for its unique architectural design.

Moreover, here you can find information about Appliances installation in London.

Situated on Varna Bay on the Black Sea, 469 km north-east of Sofia, it’s a seaside resort with a population of over 350,000. Third in population after Sofia and Plovdiv, Varna is called the seaside capital of Bulgaria. This ‘gem’ on the Bulgarian Black Sea is situated at the end of the large Varna Bay.

Ancient, medieval, renaissance and modern cultures mingle and coexist throughout the city. Varna lies on the same latitude as Biarritz in France, on a large, flat and high terrace on the northwestern most curve of the bay which juts some 7 km inland.

Apart from being a beach resort, Varna rivals the great cities of Sofia and Plovdiv with its offering of cultural attractions, historical buildings, museums and art galleries. It also provides access to some of the quieter scenic spots along the coast, including the nature reserve of Kamchiya, the royal palace of Balchik and the hillside monastery of Aladzha. Varna is an ‘all year round’ holiday destination.

Nessebar is situated 20km from Bourgas and located on a small peninsula in the Black Sea which is linked with the land by a long and narrow isthmus. It has existed for more than 9,000 years. It emerged as a fortified Thracian settlement; afterwards it was a Greek polis, then a Roman colony. It has two distinct areas, the Old Town and the New Town.

Nessebar is best known for the Old Town (about 9000 years). No one can say for sure whether the isthmus is natural or man-made. The largest number and best known buildings date from 11th to 14th centuries. Almost all of them are churches in the so called “picturesque” style: walls intersected by pilasters and lunettes, with stone, brick and ceramic ornaments and arches along the cornice. Some of the churches have stunningly beautiful facades and interiors and are among the best preserved on the Balkan Peninsula. The oldest one is the Sveti Ioan Krastitel (St.John the Baptist, 10th -11th century.

A popular resort that can get very busy during the summer. Good variety of restaurants, cafes, night clubs, cinemas and shops etc. In general the prices are lower here thanin  the international resorts like Golden Sands, Sunny beach etc. Sozopol can be compared to Nessebar and Primorsko.

Located 34 km south of Bourgas on a slender rocky peninsula, Sozopol is one of the oldest Bulgarian coastal towns. It was founded in 610 BC by Miletian Greeks. Today this charming place is a popular beach resort best known for its casual ambience, sandy beaches, and distinctive 19th-century stone and wood houses, 45 of which are national cultural monuments.

While Sozopol is extremely busy during July and August, in the off-season it reverts back to a sleepy fishing village and it is a favorite stopping place for artists and writers.

Bansko is one of the biggest and most attractive mountain resorts in Bulgaria and during the last few years has been developed as the best and most modern ski resort. It is situated at the foot of Pirin Mountain, 160 km away from Sofia.

Bansko is a small cosy town with many luxury hotels and small hostels. The lovely unique nature of Pirin Mountain flanks it. It offers a wealth of culture with around 150 historical memorials in Bansko itself. You can see Thracian mounds and many archeological finds from the ancient times in the surrounding areas.

Bansko is a town with international tourism significance. The slopes of Pirin Mountain offer excellent conditions for skiing and other winter sports that transform Bansko into a modern ski centre.

The total length of the marked pistes is 65 kilometers and they are located in two main ski centres, Chalin Valog and Shiligarnika. There are 44 snow cannons, 12 slope maintenance vehicles operate on the tracks and runs, making them suitable for all types of skiers and snowboarders. The lift network will take you right from Bansko to any slope you want. All year round Bansko is full of visitors.

Out of the ski season, which is usually from December till May, there is summer tourism program that includes hiking tours, mountain biking trips, extreme adventures, horseback riding and many other attractions. There is a festival week of Bansko traditions in May and The Bansko Jazz Fest in August, these being the most important cultural events on the calendar which attract thousands of visitors.

Wine and Dine: There are about 200 typical Bulgarian taverns (mehana), restaurants and night clubs in Bansko that offer national and regional traditional cuisine, excellent wines and a great atmosphere.

The oldest Bulgarian winter resort is Borovets with a history from 1896!

Today Borovets is a large and modern resort. It is situated on the northern slopes of the Mousala ridge in the eastern part of Rila, surrounded by pine woods 1,390 meters above sea level.

The highest pistes are 2,600 m. The climate is also considered to be healthy. The winter in the resort is mild with plenty of snow, average temperature during the coldest month January is 4.8ºC.

Usually the slopes of Borovets have snow cover from mid December till April. The air in Borovets is clear and free of any pollutants. Borovets has been developed into a modern high class ski resort with luxury hotels, restaurants, discos, shops and a good choice of pistes and lifts. It provides very good conditions for snow sports during the winter: skiing, night- skiing, snowboarding, cross-country skiing, ski jumps and biathlon.

Available are ski runs for beginners, intermediates and advanced skiers, designed with international markings and multilingual signs. Pistes are bashed and maintained to high standards. The ski runs of Borovets are located in three different regions. Cross-country and biathlon tracks are located 2 km away from the resort together with the cross-country tuition tracks.

Pamporovo is a modern ski resort in the heart of the Rhodopi mountain, (the mountain of the mythical singer Orpheus). It is the most southern skiing resort in Europe. It is the sunniest Bulgarian mountain resort with snow throughout the whole season. Pamporovo is situated 1,650 m above the sea level at the foot of Snejanka peak(1,926 m). It is 240 km away from Sofia and 85 km from Plovdiv.

Pamporovo has an exclusive climate featuring a soft winter with about 120 sunny days during the skiing period. The significant influence of The Aegean Sea appears here and the ski season starts from mid December to mid April with average air temperature at around -3°C. The gentle profile of the mountain with its rounded slopes and summits makes Pamporovo particularly suitable for beginners.

Being one of the most popular mountain resorts in Bulgaria Pamporovo has a lot to offer for the skiers and snowboarders who love to party and have a good time after enjoying the day on the slopes. In general there are many places worthy of visiting, each with its own unique style and atmosphere. English is widely spoken in this resort.

Plovdiv, the City on Seven Hills, is situated beautifully on the two banks of the Maritsa river, 130 km southeast of the capital Sofia. It is the second largest city in Bulgaria with a population of 350,000.

Plovdiv is within thirty minutes drive from three different mountain ranges and just 2.5 hours from the seaside. Plovdiv International Airport operates national and international flights. The climate is mild with Mediteranean influence, with hot summers and mild winters.

Plovdiv’s unique location on the ancient crossroads has stimulated strong cultural and political influences from East and West civilizations, and yet maintained its unique cultural identity. Being older than most of the oldest towns like Rome, Athens, Carthage or Constantinople, almost a contemporary of Troy, Plovdiv is a town built upon layers of towns and a culture developed upon layers of cultures.

Remains of ancient, mediaeval, revival and modern culture coexist to make Plovdiv a synonym of Bulgarian history and a genuine world city. The Ancient Theatre, the most impressive edifice of Roman time, was excavated during reinforcement works at the southern fortress wall. It offered almost 7,000 seats once. Nowadays it is used for staging opera and theatre festivals, concerts, municipal celebrations.

Plovdiv is not just a city rich in cultural monuments and traditions – it is also a modern, vibrant urban centre. Shopping opportunities are abundant with the biggest crowds taking the wide pedestrian shopping street in the city centre. There, as well as on every side street you’ll find charming restaurants with great food and affordable prices. Food is top quality as Plovdiv is the centre of the main agricultural region of Bulgaria. The mixture of ancient history and heritage, modern infrastructure and lifestyle makes Plovdiv a place where the visitor can sample virtually all facets of life and culture not just of Bulgaria, but also of the Balkan region.