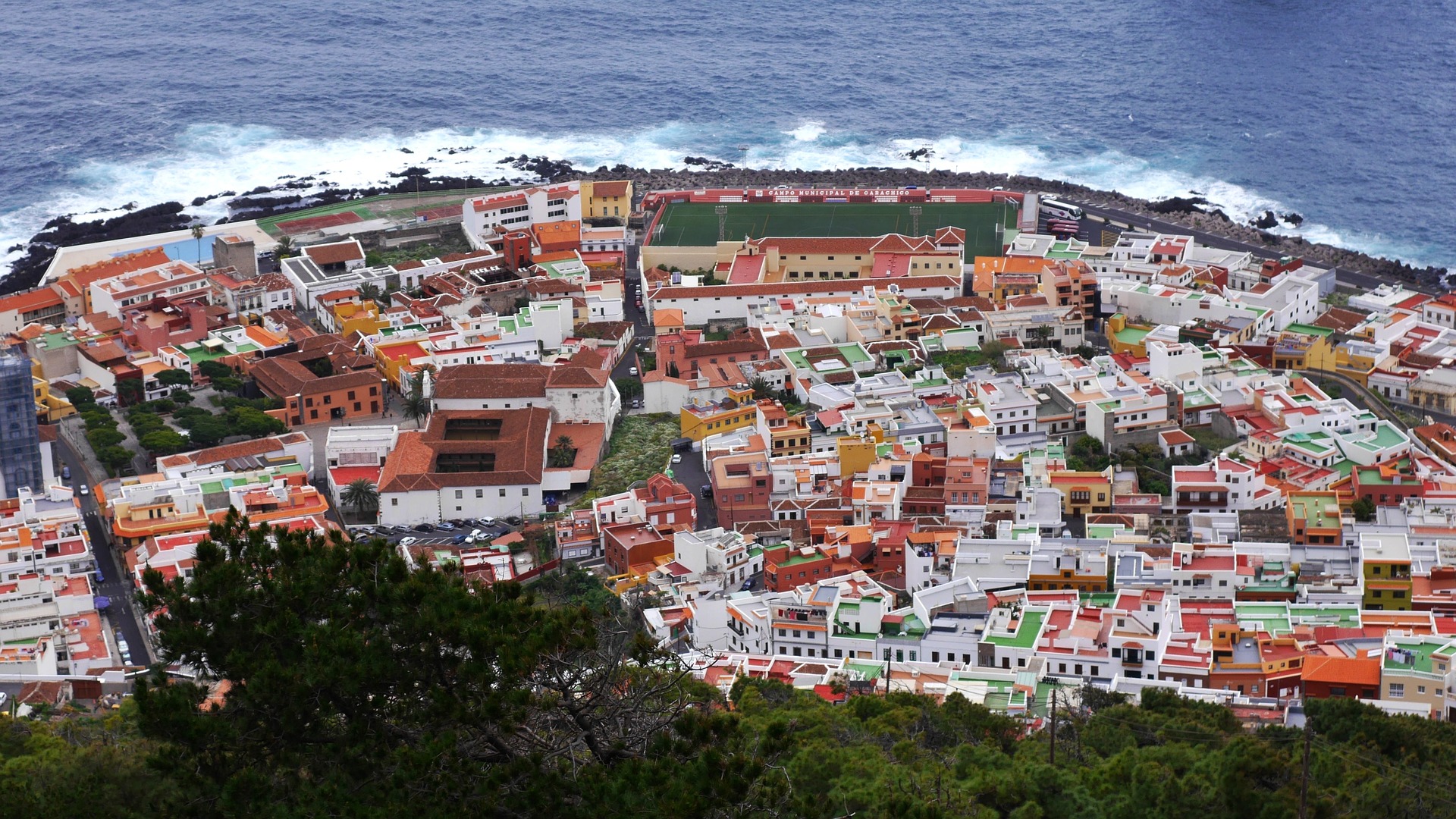 Declared a national park in 1954, the Parque Nacional de las Cañadas del Teide includes an enormous volcanic crater 48 km in circumference, out of which rises Mount Teide (pronounced the same as Lady) at a staggering 3.718 metres, making it the highest mountain in the whole of Spain.

The park itself lies at around 2000 metres above sea level and in winter snow falls, gale winds blow and the roads are sometimes closed off. During the summer months this arid landscape which gives the impression of having walked into a cowboy movie, can reach temperatures above 40C.

Access to the now extinct volcano is either by foot or by cable car that will carry you almost to the very summit. From the peak, on a clear day, you are in heaven and have breathtaking views of Gran Canaria, La Palma, La Gomera and El Hierro. This is the Canary Islands most visited tourist attraction and it must not be missed.

Originally, Los Cristianos was a small fishing village and much of the old town still retains a Canarian feel. Its crescent shaped bay has a beach over 400 metres long with a wide variety of water sports on offer. The town has now developed into a modern, thriving resort, with plentiful shops, cafes and restaurants and there is a regular market every Sunday but it still retains it fishing village origins.

Los Cristianos is situated 15 km’s west of the southern airport (Reina Sofía).This is without a doubt one of the most popular resorts on the Canary Islands. The artificial beaches are very nice and it has a wonderful harbour that offers fishing trips, pleasure cruises, glass bottom boats, diving excursions and ferries to La Gomera.

Los Cristianos tends to attract a slightly older holidaymaker in comparison to Playa de las Américas and it has managed to keep a little of its original architecture and atmosphere as a quaint fishing village. But you will need to look hard!

The nearby AquaPark Octopus is a must for any family. Believe us, your kids could spend their whole holiday there.

Santa Cruz is both the administrative centre of the western Canary Islands and the capital of Tenerife. Located on the northeast cost it is a bustling city and shipping port (one of the busiest in Spain and deepest in the world). The enormous harbour holds many container ships, cruise liners and inter island jet foils and ferries.

Situated in a large natural bay, it has a stunning backdrop of mountains (Anaga mountains) that are over 1000 metres high. The city does not offer very much for the sightseeing tourist but is an excellent base for exploring the northeast of the island.

Shopping is excellent and most visitors begin at the Plaza de España on the seafront and work their way up Plaza de Candelaria, which offers excellent international brands at ‘tax free’ prices.

The Island Tourist Board is located in the city and here you can collect maps, street plans and other information.

Puerto de la Cruz is one of the top resorts in the Canary Islands. It is also the longest established most complete of all resorts on Tenerife. The Old Town is very pretty in parts and it is one of the few resorts where the locals still work, eat and drink. Much of the area around the old fishing port is full of narrow cobbled streets packed with colonial architecture.

Tourism was born here over a century ago by the British and today ‘Puerto’ has a wide span of magnificent hotels to suit all tastes and budgets. In addition to its old world charms it offers some of the best visitor attractions in the islands.

Playa de las Americas is a cosmopolitan and modern resort, with beautiful beaches and international shops and stores. It is the main tourist resort in Tenerife, attracting over 1.25 million visitors every year, mainly the young, attracted by the numerous bars and clubs that go on until the early hours of the morning.

Fañabe is a quiet resort with a long white sandy beach. Considered by many to be one of the top up and coming areas on the island, Fañabe is gaining a reputation as the St John’s Wood of Tenerife. It’s a wonderful place to spend quality time together and with friends, or just relaxing in the sun and soaking up the atmosphere.

Los Gigantes is one of the most picturesque resorts on the island and it is so popular that people return there  time after time. It is situated on the west coast of the islands and takes its name from the sheer cliffs called the ‘Acantillado de Los Gigantes’, which rear up to a height of about 1,650 feet, then fall steeply down into the sea just to the north of the resort.

Across the small bay lies the little port and resort town of Los Gigantes and, virtually linked to it, Puerto de Santiago.

The only way for you to get closer to these amazing cliffs is by boat. Once there, you will get the real notion of the greatness within those walls and maybe understand why ancestors considered them sacred. See, they thought the world ended here, and who can blame them?

Situated to the East of the southern tip of Tenerife, and set around a championship level 27 hole golf course. Golf del Sur is a popular venue for the golf enthusiasts and for those who just want a quiet break away from it all. The coastline provides a nice setting for an evening walk, with purpose built romenades, but the majority of the coastline is rocky with no real sandy beaches.